The latest attack series racket brought out by VICTOR in 2014, the TK-9000, features the thinnest and lightest nano grade material graphene; also featuring super nano fiber use, the TK-9000 is a light racket with excellent anti-torque properties that is a powerful attacking weapon, a veritable “horseman’s sword.” 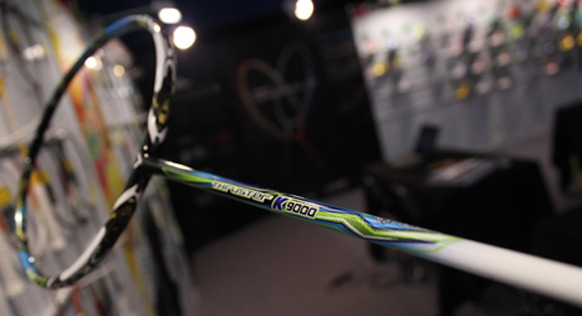 The TK-9000 has an attractive coating 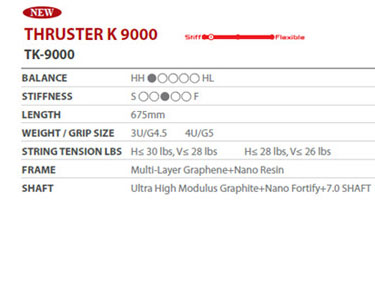 The coating of the TK-9000 is mainly black with aqua marine as the secondary color, and touches of white and jade green, the clever mix of plain and fancy colors creating a strong, bold and powerful but also elegant image.

Just like the sword wielded by a medieval horseman, the TK-9000 has formidable attacking power that will leave opponents trembling; it also has the fine quality feel fit for nobility, leading to some badminton fans calling it the “horseman’s sword,” a name that is actually quite fitting. 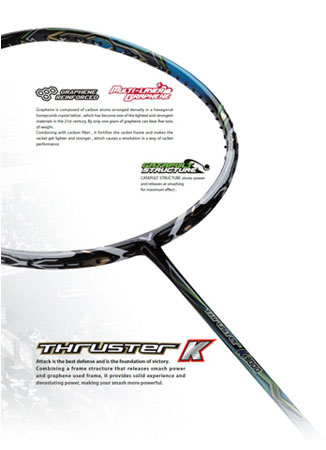 A few basic indicators show that the TK-9000 is without doubt a member of the attacking racket family. The racket is head heavy and the 3U weight racket can be safely strung to 30 lbs (horizontal strings), and 28lbs (vertical strings), showing the pedigree of the TK-9000.

Also, compared to previous attacking rackets, the TK-9000 has better strike feel. This astonishing improvement in performance has been achieved because of the use of three important technologies in the manufacturing process.

1. NANO FORTIFY: The nano carbon tube made up of tubular nanostructures makes the shaft stronger but still pliable. When the shuttlecock is hit, power is stored up by the distortion of the frame and is then converted to striking energy, increasing the explosiveness of the strike.

2. MULTI-LAYER GRAPHENE: Graphene is a carbon hexagonal crystal lattice film that is one of the lightest, thinnest and hardest materials in the world. Just one gram of graphene can bear five tons in weight. Using graphene makes the racket lighter and more solid.

3. CATAPULT STRUCTURE: The design like the medieval catapult increases the force of the user’s swing and releases this power at the instant the shuttelecock is hit, maximizing destructive power.

The TK-9000 has a larger racket face than the TK-8000 which makes the sweet spot larger too. Under normal circumstances, using the TK-9000 makes hitting quality shots easier, as well as allowing unbridled attack. The design is “head heavy” so the racket’s downward pressing performance when the shuttlecock is hit is better than other rackets. 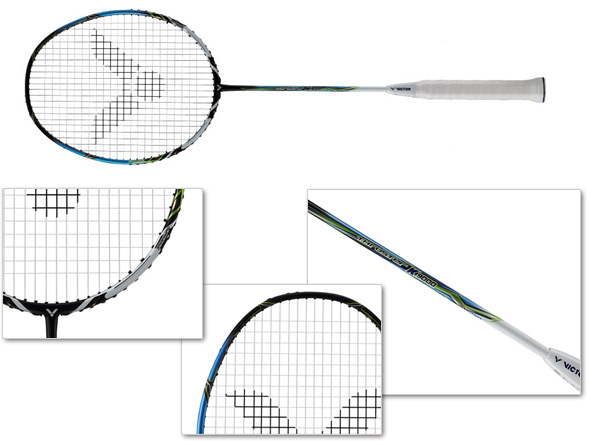 When a big swing is taken with the TK-9000, like when playing a clear or smash, the added power given by the head heavy design can be clearly felt. Playing a clear requires discernibly less effort than with other rackets. Without any effort at all, clears can be played long and high.

More advanced players can try increasing downward force of the wrist and will find they can play flat clears that fly at an amazing sped, giving a shot that was original a transformation shot offensive capability, and even allowing you to instantly turn defense into attack.

Play smashes that are fast and high quality

One of the main features of the TK series rackets is that they increase the destructiveness of attacking shots. The most important attacking shot is the smash. Everyone is sure to be interested to learn about the TK-9000’s overall performance when playing smashes.

Some players play smashes that are well directed but lack speed;some others have fast smashes but they lack destructive power. If your smashes are of these two types you really should try the TK-9000. VICTOR’s professional racket testers mentioned that when using the racket to play smashes the shuttlecock travelled quickly and shot quality was also ample. In other words, it won’t be easy being on the receiving end of a smash delivered using the TK-9000! 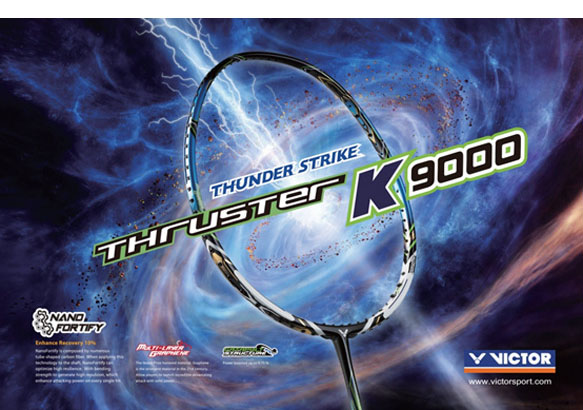 The Higher the Racket String Poundage the Better?