A racket is fundamentally determined by its weight and stiffness, and its shaft is the primary structure which directly transmits the hitting feel of the racket. Conceivably, “The shaft is the soul of a racket”.

Disregarding the factor of variance in materials, the three indicative parameters of a shaft are, weight, stiffness and anti-torsion. The effects of these parameters are elaborated in the following passage by the example of different rackets. 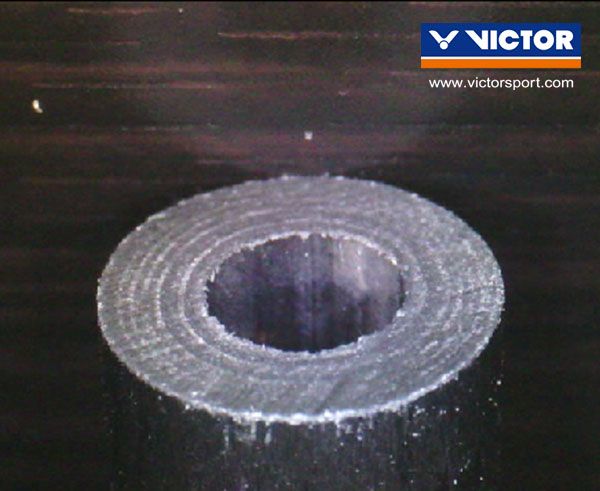 Generally speaking, once the final product of a racket is presented, it is hard to measure the weight of the shaft. A shaft normally weighs between 11 g to 13 g. Though the influence of shaft weight upon the balance point is rather trivial, it still affects the handling feel of the racket in terms of weight distribution as a whole.

In addition to frame weight, the shaft also determines the sense of weight at the head of the racket. Let’s take a close look at one of VICTOR’s classic racket, MX-80. Its shaft is considered slightly heavier which gives the entire racket a heavier sense of weight without overweighting the head and compromising smooth handling. JS-10, on the other hand, features a lighter shaft. Although it is categorized as a 4U racket, the additional weight is distributed at the head to enable effective attacks while maintaining satisfactory speed performance.

In fact, the seemingly trivial variance in bending amplitude often comes down to less than 1 mm. However, that less than 1 mm difference is effective in causing a completely different handling feel. To be specific, let’s compare rackets. JS-12F features a more flexible shaft as apposed to JS-12’s stiffer shaft. Evidently, JS-12F appears more comfortable and easier to use.

Not every hit falls in the sweet spot during quick exchange of shots, so the racket would inevitably have to endure torsion. Therefore, the anti-torsion performance of the shaft crucially determines a racket’s hitting stability. It also reflects in the stiffness of a racket when taking hits. However, anti-torsion is a commonly neglected parameter when it comes to picking one’s suitable racket.

The variance in anti-torsion performance and torsion angle is extremely small in figures, but in fact, a 0.5-degree variance is significant enough to determine the actual sense of stiffness of a racket. By the example of VICTOR’s three racket types, HX-900 of the HYPERNANO X series features higher anti-torsion performance when compared to other rackets. Accordingly, it enhances stability and precision in hitting. It also comes with a more solid hitting feel.

The diameter of a shaft partially determines the racket’s weight, stiffness and anti-torsion. That said, considering differences in shaft materials and manufacturing process, larger diameter does not necessarily mean higher stiffness, and smaller diameter is not necessarily equivalent to better flexibility. For example, TK-9900 has a 6.4 mm shaft, and JS-12 has a 6.8 mm shaft.

Regardless, two rackets weigh almost the same. Whereas, JS-10 with a 6.8 mm shaft weighs lighter than the previous two rackets. The reason being, the shaft is a hollow tube that has an inner diameter as well as an outer diameter. Normally, smaller outer diameter corresponds to a smaller inner diameter. Hence, the size and weight of shafts of different diameters usually barely vary.

The key to making a shaft lies in the balance of stiffness and anti-torsion within the limited range of space and weight. A decent shaft should allow the racket to bring its characteristics into full play in coordination with the frame, grip and other parts of the racket.

WHY ARE BADMINTON SHOES A MUST?